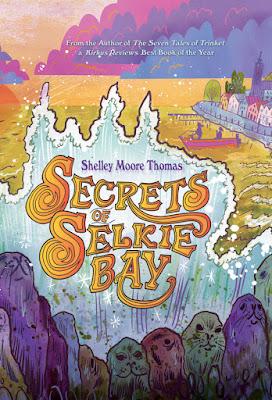 "Secrets of Selkie Bay lies somewhere between fantasy and reality, creating a wonderful place where readers can be both pragmatists and believers in all things magical, like the characters who inhabit the pages of this poignant, bewitching book. Shelley Moore Thomas has created a world layered with stories and mysteries and pain, one that calls like the sea, draws us in, and never lets go. After they turn the last page, readers will dream of seals and selkies and the deep love of family that shines in the darkest storms." - Nikki Loftin, author of Nightingale's Nest and Wish Girl   "Shelley Moore Thomas has a wondrous way of weaving magic and myth, loss and longing, wonder and hope into stories that sing. Cordie’s seaside fairytale cast a spell on my imagination. If I lift up the pages and listen closely, I’m certain I can hear the ocean."
Natalie Lloyd, author of A SNICKER OF MAGIC 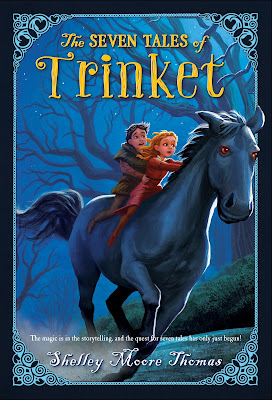 If you love Celtic folklore, THE SEVEN TALES OF TRINKET is the book you've been wishing for.                  "Expertly told"  School Library Journal

"Thomas offers an impressive debut novel in which she weaves seven compelling stories together with narrative power and considerable grace."—Booklist, starred

"Thomas (the Good Knight series) spins tales worthy of her heroine’s aspirations in this nimbly structured collection of seven magical adventures that build into a highly rewarding story.”--Publishers Weekly, starred

“…what stands out most is Trinket’s clear voice and loving heart, both of which will endear her to readers.” —Kirkus, starr

"All storytellers have special powers, as Trinket learns on this incantational Irish odyssey to find her fate and her father."
- Newbery Award winner, Richard Peck


"Trinket is a riveting middle-grade debut – a seamless blend of story and song that tells a thrilling tale of a bard-in-training’s quest to find her father. Utterly enchanting!"
-- Diane Zahler


Take a look at the Trinket Trailer:

Guided by a tattered map, accompanied by Thomas the Pig Boy, and inspired by the storyteller's blood that thrums through her veins, eleven year-old Trinket searches for the seven stories she needs to become a bard like her father, who disappeared years before.  She befriends a fortune-telling gypsy girl; returns a child stole by the selkies to his true mother; confronts a banshee and receives a message from a ghost; helps a village girl outwit--and out-dance--the Faerie Queen; travels beyond the grave to battle a dastardly undead Highwayman; meets a hound so loyal he fights a wolf to the death to protect the baby prince left in his charge.  All fine material for six tales.  But is is the seventh tale, in which Trinket learns her father's true fate that changes her life forever.

Click here to purchase this book from Barnes and Noble.

THE SEVEN TALES OF TRINKET (reviewed on August 15, 2012)
Like her main character, Trinket, Thomas clearly loves storytelling, and she has a real talent for it, too.
Seven interlinked episodes follow a brief exposition. The distinctness of these episodes keeps the text from seeming overlong, particularly since the smooth flow and intriguing elements will easily capture readers’ interest. Unusual characters (a gypsy princess, fairy queen and ghostly highwayman, among others) add excitement and suspense, while the overarching tale, which effectively connects the disparate characters and individual events, features a quest of sorts. Eleven-year-old Trinket recently lost her mother to a fever. Her father, a wandering bard, abandoned the family five years ago when he failed to return as promised from a storytelling sojourn. With no one to care for her, Trinket sets out with a friend to discover what became of her father—and to collect some stories to tell. Hardships abound, and the two often go hungry, but they persevere in their search. Readers familiar with Celtic folklore will recognize the outlines of some of the sections. But even those for whom selkies and banshees are brand-new will appreciate the clever way Thomas weaves together traditional elements and her fictional creations.
Though it’s filled with incident, emotion, magic and adventure, what stands out most is Trinket’s clear voice and loving heart, both of which will endear her to readers. (Fantasy. 8-12)


From Publisher's Weekly (a star, too!):

Thomas (the Good Knight series) spins tales worthy of her heroine’s aspirations in this nimbly structured collection of seven magical adventures that build into a highly rewarding story. When 11-year-old Trinket’s mother dies, Trinket sets off to find her father, a celebrated storyteller known as James the Bard, and resolve her anger and anguish as to why he abandoned them five years earlier. Accompanied by her good friend, 10-year-old Thomas, following an old map of her father’s and keeping secret her dream to become a storyteller herself, Trinket has exciting, often frightening experiences that turn into the tales that come to define her as the Story Lass. In one coastal village, she rescues a human baby from selkies and is rewarded with a magical harp, on which she learns to compose melodies that lull humans and animals alike. Set in a realistic, unspecified long-ago time and country, the tales are rooted in Celtic folklore and populated by banshees, ghosts, faeries, and gypsies; each ends satisfyingly with a simple, lyrical song that captures its emotional essence. Ages 8–12. Agent: Joanna Stampfel-Volpe, New Leaf Literary & Media. (Sept.)
________________________________________________________________________________

Click here to purchase this book from Barnes and Noble.